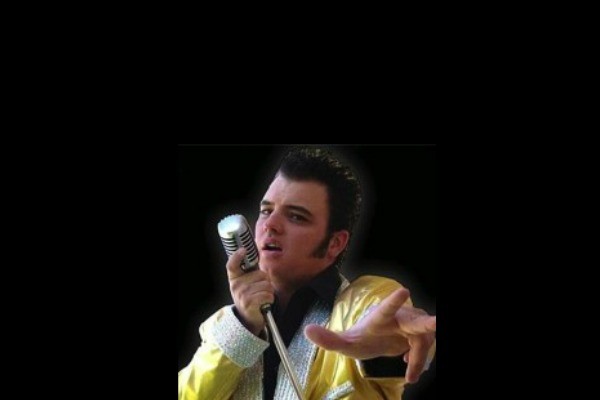 Rob Langford’s singing experience began in his church choir at the tender age of thirteen where he first heard The King’s inspiring gospel hymns. After high school, Rob answered the call of duty and enlisted in the United States Army. Elvis Rob has been honored with special assignments supporting our troops both at home and abroad singing with the 33rd and 62nd Army Bands. His shows were given outstanding reviews by some of our military’s top officials. Rob has toured countries such as Germany, France, Belgium, Austria, and Kosovo, sharing his gift and love of music with thousands worldwide. Dressed in full Elvis attire, Elvis Rob amazed our troops with his accurate portrayal of The King.

Rob’s talent and experience have made him one of the most unique and versatile entertainers in the business today. His shows will take you on a journey back in time to a place where The King of Rock and Roll reigned supreme. Rob’s debut CD, My Tribute to Elvis, was released in the spring of 2003 with dazzling success. In the summer of 2004 Rob competed in Images of the King, an international Elvis Tribute Artist Contest in Memphis, where he qualified as one of the top finalists in this world competition.

He did my wedding and did a wonderful jobMolly Spicer Brown

Elvis Rob recently completed his military service and is now pursuing a lifelong dream of paying tribute to Elvis as a full time profession. Rob Langford preserves our memories of The King not only with his outstanding vocal abilities, but also by maintaining the integrity of Elvis’ wardrobe wearing only the most authentic costumes available. These traits, coupled with his ability to portray every era of Elvis’ spectacular career, have earned Rob numerous awards and achievements throughout the world. Rob Langford continues to produce quality performances and will remain a constant in the entertainment industry for years to come.

For your Elvis Impersonator!