Voodoo Visionary hails from the dirty south musical mecca of Atlanta. Their improvisational funk dance music delicately balances a tight rhythm section featuring deep grooving bass and funky drum beats with diverse and dexterous keys and masterful guitar licks to create a sound the group calls psychofunk. Influenced by a wide array of artists such as Parliament Funkadelic, the Grateful Dead, Talking Heads, and Medeski Martin and Wood, Voodoo Visionary has a uniquely blended sound that’s guaranteed to put the ‘oogie in yo boogie. 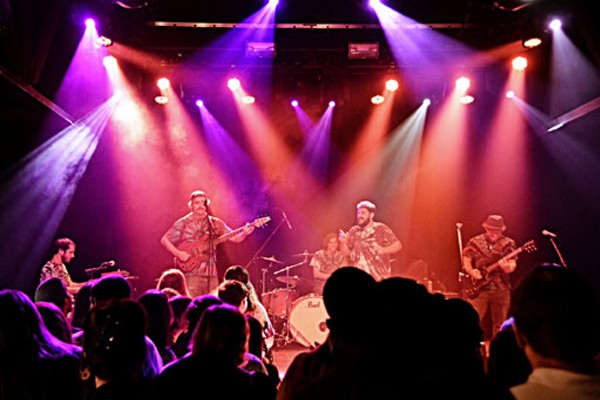 The band is made up of Dennis Dowd (keys), Jimmy Lynch (bass), Scott MacDonald (vocals), Mac Schmitz (drums), and Mike Wilson (guitar). Wilson, Schmitz and Lynch have been playing together for over 8 years, during which time they built a unique chemistry that allows for exceptional improvisation during live shows. MacDonald joined the group in July 2013 as the lead vocalist and Voodoo Visionary began writing new music and playing shows immediately. Dowd was added to the band in March 2014 providing a missing link that enhanced the band’s distinctive sound, and the group has since taken off around the Atlanta music scene.

Voodoo Visionary released their debut album, Spirit of the Groove in March 2015. Over the past two years, while playing across the southeast, the band has shared the stage with acts such as Col. Bruce Hampton, Zach Deputy, Earphunk, Roosevelt Collier, Jerry Joseph, and Futurebirds. The band performed at the RAW Artists Atlanta showcase in September 2014 at Terminal West, made a live radio and TV appearance on WUGA’s It’s Friday program, and in May 2015 made their major festival debut at Counterpoint Music Festival near Rome, GA.

Spirit of the Groove draws from the various musical influences found among the band members. Elements of funk, jazz, disco and rock n’ roll combine to create an inimitable sound. Tracks such as “All Week,” “Salt” and “Parasite” have compositional elements reminiscent of Frank Zappa and Return to Forever, while “Take the Wheel” evokes a style similar to Phish. The driving grooves of “The Heathen,” “Testify” and “Dancin’ Feet” make it nearly impossible to sit still while listening, and the “Kang Gang Anthem” hints at elements of Pink Floyd while paying homage to the festival scene the band holds so close to their hearts. Spirit of the Groove was recorded live in the studio to capture the raw energy and showcase the improvisational expertise that the band brings to their live show.